After the war of 1867, the town of Ladybrand was founded to stabilise the “conquered territories” of the Boers. Then, 33 years later, the town was again embroiled in violence during the Anglo-Boer War, during which it was occupied by the British.

Today, Ladybrand is a peaceful retreat for those wanting to explore the Eastern Free State, or are heading to Lesotho. Lying in the shadow of Platberg Mountain is the tranquil, well-established resort of Little Rock Holiday Camp. Surrounded by wind-eroded sandstone that stands out among the lush green trees and bush, the resort gives one the feeling of being in a Pierneef painting. Rounding off the idyllic setting is the melodious backtrack provided by a spectacular range of birdlife.

The resort has 36 grassed sites, most with shade, and 13 self-catering chalets. All the camping sites have electricity, and there are ample ablutions.

Little Rock also has its own lekker little sports pub with satellite TV, where you can order some drinks, and have a jol, and enjoy a meal.

But, if you want to get into nature, you will be pleased that there are hikes into the surrounding mountains to choose from. I took one of these, up to the top of the Platberg. I found that, from the summit, one has a magnificent view of the whole town. Many of the surrounding mountains, which are capped with sandstone cliffs, also have caves containing San paintings.

Guests can enjoy various activities on the resort, such as swimming, volleyball, and a children’s playground. The more adventurous can even go rock-climbing on the bolted rocks.

The area is rich in history, ranging from artefacts from the Stone Age to implements and fossils from thousands of years ago. The remains of Diathrognatus, a prehistoric animal which scientists believe is the link between mammals and reptiles, were found in this area. The fossil is the only one of its kind in the world!

A 20-minute drive north will get you to the town of Modderpoort, where the Anglican Society of St Augustine built a cave church in 1869. It’s a must-see for anyone who is in the area.

And, don’t forget to pack your passport! Maseru, the capitol of Lesotho, is only 18 kilometres away, so popping over to another country for a quick visit is easy!

This article and content is reserved by Caravan Publications under South African copyright law. 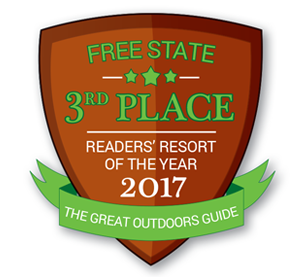